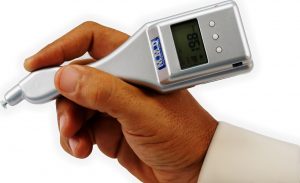 PalmScan T2000 Proton Tonometer / Tonographer is a revolutionary applanation pnuemo-tonometer/tonographer offered by MMD.  The handheld, battery operated system is capable of operating in the stand-alone mode or in PC Mode. In the stand-alone mode, the system functions as a tonometer.  This contact tonometer generates a small flow of air using its patented air flow technology and is capable of measuring IOP with the patient in any orientation (completely independent of gravity). It also functions independent of corneal curvature and is able to measure on very steep or flat corneas. It is a perfect complement to the PalmScan P2000FP pachymeter device for measurement of pachymetry adjust IOP.

In the PC mode (Tonographer) mode the device displays and stores the intraocular pressure over time and can accurately measure the Ocular Pulse Amplitude (OPA) which is an indication of rise and fall of IOP with the heart rate. The device is also capable of measuring the Mean Ocular Profusion Pressure (MOP) which is a useful value for determination of risk of glaucoma. In the PC mode, the system is capable printing detailed PDF reports that can be  emailed or sent to a standard printer.

Weighing only 5 oz (140 grams), the PalmScan T2000 Proton Tonometer is very light and easy to hold and operate and it easily fits in a lab pocket. The device has a built-in rechargeable battery and can measure over 300 eyes on a single charge.